How Rajant Kinetic Mesh® revolutionised operations at the ASARCO Ray Mine

The Asarco Ray Mine is a large open pit copper mine, dating back to the 1880s and located close to Kearny, Arizona.

The mine is expansive and multi-functional: today, the 250,000-ton per day (tpd) open pit mine is equipped to support both a 30,000 tpd concentrator and a 20,000 tpd concentrator. The operation also includes a 103-million pound per year Leach solvent extraction/electro-winning (L-SXEW) operation and all the associated maintenance, warehouse and administrative facilities.

The company ships its cathode copper to the ASARCO Amarillo Copper Refinery as well as outside customers. 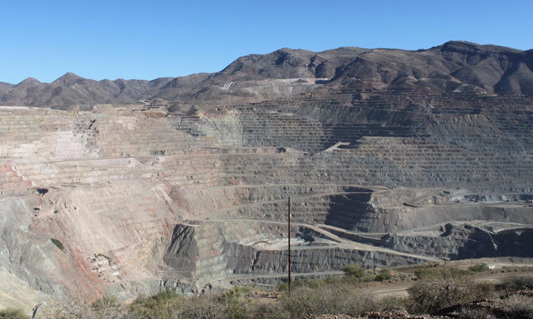 Remember when we mentioned that the mine was large? In fact, ASARCO Ray covers an area of about 21-sq miles – a coverage area roughly three miles wide and seven miles long. The location of its staggering 2,400 feet deep pit in a steep valley meant that it was near impossible to implement an appropriate wireless network.

A network enables the ability to collect complete and accurate data, which is critical to the company’s success. The team uses this data to evaluate the performance level of drills on rocks and to determine the best scenarios in which to employ different methods, such as crushing and blasting. What’s more, due to the site’s geography, the vast majority of the mine haulage operation involved lifting material out of the pit to the dumps or crushers (vertical hauls up to 1,800 ft.). The elevation change adds an additional complexity that must be accounted for. As a result, communication with trucks, shovels and other equipment can be difficult.

The private legacy wireless network was no longer facilitating this. It had originally been intended to support the computer-aided fleet dispatch system, but with the introduction of other new technologies across the mine, the network no longer proved sufficient; unable to even support even a fraction of its designed capacity of 8 megabytes per second.

This uncertainty halted productivity at the mine, where stakes are high. No one wanted to make decisions based on faulty data. Finally, ASARCO Ray invested the time to ascertain the cause of its communication issues. Senior technology Engineer Bob Wingle solved the mystery in April 2013, and it was concluded that the operation’s wireless network was the culprit.

ASARCO Ray discovered that Rajant had a proven track record of success implementing Kinetic Mesh Networks® at other operations facing similar needs for scalability and mobility.

The mining company’s primary concerns were coverage, throughput, and dealing with challenging geography. It was found that Rajant’s wireless BreadCrumb® nodes enable voice, data and video communications to “hop” from node to node with little administrative overhead burdening the network. Workers at the mine “chase” the ore, while advancing as efficiently as possible. The network infrastructure is, therefore, a key component required to support this strategy.

For this reason, finding a way to avoid network disruptions was paramount. The team was impressed by the way the Rajant network could rebuild and “heal” itself based on whatever wireless nodes were available, eliminating downtime. The fact that the network intelligence is distributed across all BreadCrumb® nodes, rather than relying on a single controller node to drive communication, was a significant differentiator from other mesh vendors ASARCO evaluated.

What’s more, BreadCrumbs®, coupled with Rajant’s InstaMesh protocol, offered stability in even the most rugged environments. “We found Rajant’s solid track record in military operations reassuring. Its mesh networks have delivered many benefits in those dynamic environments,” a representative from the mine told us.

Based on these factors, ASARCO Ray deployed the Rajant network in May 2014. Solar trailers were used to accommodate the expansion, and technical leadership divided the mine into three sections to stagger the implantation.

ASARCO Ray’s investment has already paid off. The Rajant wireless network has allowed the mining operation to overcome all of their geographical challenges, such as terrain and interference, to collect complete and reliable data from 14 different source systems. The best part? They can have 100% confidence in its accuracy.

Even those outside of the technology team have lauded the efficacy of the new technology: “we were not able to trust all of the data we collected until we implemented the Rajant network,” explained James Stewart, Technical Services Manager at ASARCO Ray. The company has also accomplished a highly beneficial feat in the mining industry – managing material movement from the mining phase to the mill. Thanks to Rajant’s wireless mesh network, ASARCO Ray has elevated its mine-to-mill process oversight to an entirely new level.

As a result, officials can now track the energy it takes to drill, therefore helping the organization to streamline how they blast and process rock.

Carlos Torres, Technology Account Manager at the project integrator, SITECH-Southwest, explains the overall impact of the change on the mine: “the ASARCO Ray team has reported that Rajant’s mesh network is far superior to its previous network and that it has exceeded expectations. For example, we had guaranteed it would perform at a minimum of 24 megabytes throughput, and it is performing well above that.”

Furthermore, the Rajant Kinetic Mesh network has enabled ASARCO Ray to consider other advanced technologies for the organization. In fact, vendors such as Caterpillar are testing their technologies on ASARCO Ray’s network. Additionally, a local university is evaluating data analytics based on the project. In this way, leadership has become proactive about considering additional solutions to further enhance business now that the operation has a robust network infrastructure. Essentially, the advanced nature of Rajant has given the organization a competitive – and innovative – edge.