Mealey’s Furniture has been providing high-quality furniture and second-to-none customer service since the 1970s. The company operates six stores as well as warehouses in Pennsylvania and New Jersey, and also offers next day delivery.

To fulfil all of these orders on time and maintain their positive customer relationships, a powerful wireless network incorporating RFID tracking became essential to Mealey’s Furniture warehouse operations. 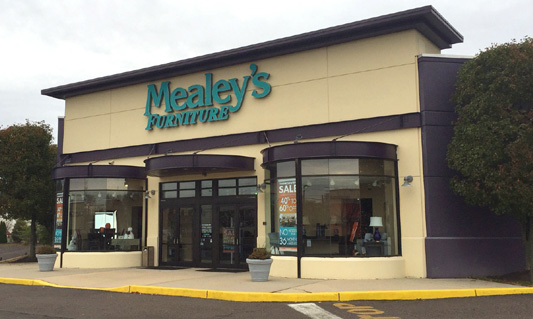 However, Mealey’s network started to drop connectivity on a regular basis. This downtime could sometimes last for between three to five days at a time, leading to missed orders and complaints.

“We deliver our merchandise the next day, and when you cannot maintain communication to pull merchandise from the racks, it creates a major problem,” Ed Darcy, Mealey’s President, told us.

Unfortunately, the malfunctioning network had a far-reaching impact – Mealey’s order fulfilment system includes seven order pickers (or lifts), all equipped with computers that communicate with access points, as well as computer carts, workstations, handheld scanners and iPads. As the majority of the equipment operated on a radio frequency, productivity across all of these systems was severely affected.

Despite dedicated efforts to determine the cause of the problem, the loss of connectivity remained a mystery. When a neighbouring business revealed it was using Kinetic Mesh technology from Rajant, Mealey’s Furniture got in touch.

After assessing the situation in a series of meetings, Rajant assured Mealey’s it would not leave until the network was performing at its optimum level.

So, what made Kinetic Mesh technology the right solution? These networks provide optimal connectivity across an organisation’s dynamic environment of both fixed and mobile assets, delivering critical information in real-time. Nodes, or BreadCrumbs®, always source the best available traffic path and frequency for data for maximised performance. These nodes can act independently, creating a true peer-to-peer, mobile-enabled network. And most importantly, there is no single point of failure – meaning no more costly downtime.

The smooth implementation of the Rajant network took place over just a day and a half in July 2015. The project was overseen by Chad Bittinger, Systems Integration Manager at Becker Wholesale Mine Supply, and his team. They used 11 nodes – two ME4-2450Rs and nine JR2-24s. They deployed the JR2-24s on Mealey’s mobile network, made up largely of forklifts for picking.

Mealey’s Furniture now enjoys a powerful and seamless network, and has experienced a huge boost in productivity. The numbers in the departments affected have rocketed, and perhaps most importantly, the inventory team has made great strides in its efficiency. Thanks to Rajant, team members can scan merchandise without interruption. This allows them to maintain appropriate inventory cycles, and also correct human errors.

Darcy explains the hugely beneficial impact of Rajant on his business: “before Rajant, the first question on our minds each morning was, ‘will operations be up or down today’?” he tells us. “Now, thanks to Rajant, it has become an afterthought. The network used to really consume our time and IT resources. The morale of the team – including the managers on the floor and the workers who deal with the equipment – has improved remarkably. And we have switched gears into improving some of our other processes that needed attention.”

As Mealey’s Furniture looks to the future, it’s clear that Rajant’s network has provided a whole host of new opportunities. The company is researching using cameras on forklifts to monitor operators’ picking processes. This could aid not only in quality checks but in tracking down misplaced inventory.

Darcy sums it up best. “Downtime is really the critical factor in our business. We just cannot afford interruptions, and with Rajant’s technology, we have virtually none.”