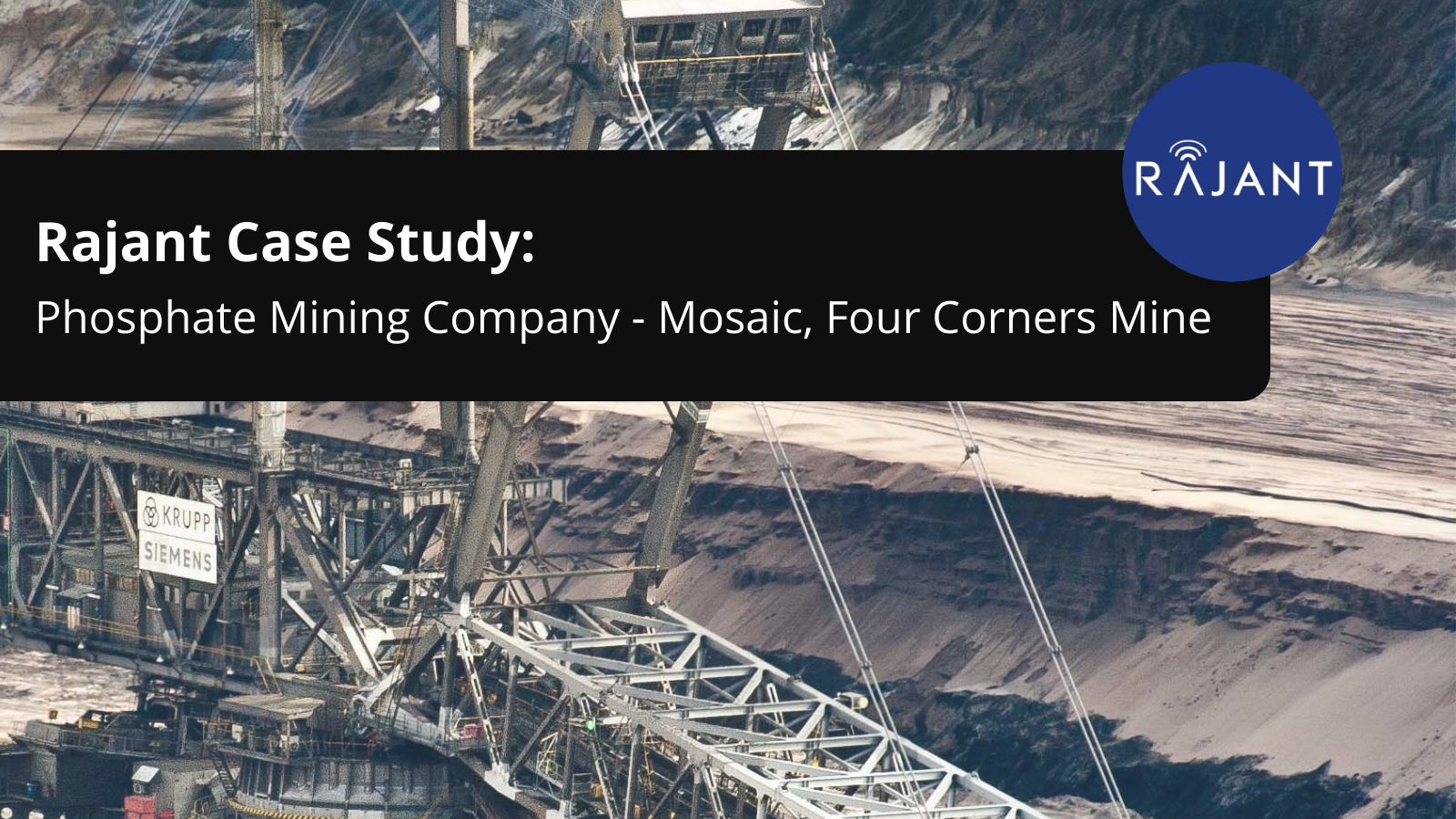 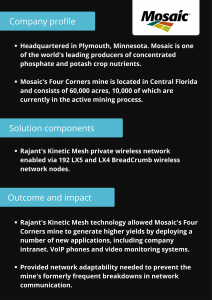 Mosaic’s Four Corners Florida mine covers 60,000 acres, and is the largest and most complex centre of operation for the organisation. Multiple, critical applications must always be running simultaneously to maximise efficiency. The mine runs 24 hours a day, 365 days a year, with the phosphate then shipped off to major agricultural centres across the world, and powers a significant chunk of the economic activity in North America.

The mesh network that was being used ran at about 900 MHz, the point-to-point radios had very slow bandwidth and were positioned almost a mile away from each other, which resulted in frequent network interruptions, and in turn, slowed down production.

Four Corners was dependent on draglines, which are constantly moving and come with a high capital cost. One way to minimise costs and error is to set up ruggedized cameras to actively monitor the dragline operations, however, the low-bandwidth network meant only two cameras were able to be supported, which made it difficult to pinpoint issues.

In order to improve the communication network, Mosaic partnered with Rapid Systems, a wireless solution provider, who introduced Rajant’s Kinetic Mesh technology to update the infrastructure.

“Mosaic’s Four Corners is a complex environment because of its large size and infrastructure. It was imperative that we install a resilient wireless network that could support multiple mobile applications without a break,” said Dustin Jurman, CEO of Rapid Systems.

Kinetic Mesh networks are comprised of a number of individual nodes, rather than a static infrastructure. This enables all devices, and the entire network, to be mobile, which is essential in mining facilities where vehicles an equipment are constantly moving.

The mesh network enables multiple radio frequencies between any nodes, which continuously transmits data in real-time via the best possible traffic path.

There is no central control node, which means there is no single point of failure. Routes are constantly monitored for performance, if there is an issue the signal will be instantly rerouted to the next best possible path. This allows the network to adapt to node locations, local interference and congestion.

Once set up, this new solution allowed a number of new applications to be deployed, including company intranet, VoIP phones and video monitoring systems.

“Using Rajant’s wireless network, we have implemented highly functioning command centres with detailed dashboards that allow us to monitor even our mobile gear, such as draglines and pit cars, ensuring that nothing ever sits idle, to maximize productivity.” “Ivan and his team are continually innovating and improving their processes, which makes Mosaic’s Four Corners a unique mining site. The opportunities to add value are endless,” Jurman said.

Most importantly for mining operations, Rajant’s Kinetic Mesh has allowed Mosaic to create and install new applications to boost their commitment to safety. The information that can now be transferred via the network allows operators to continuously track and monitor key performance indicators. Nodes positioned in strategic locations can track mines and important machinery giving them a transparent view of the operation. This improves productivity and also reduces the risk of failures and safety issues.