The Philadelphia Folk Festival is one of the United States’ most beloved and long-running festivals, having taken place at the Old Pool Farm 35 miles outside of Philadelphia since 1962. Every August, the working farm in Schwenksville is transformed into a haven of music and culture. Thousands of camping music-lovers flock to the four-day festival.

Co-founded and MC-ed by legendary DJ and “Grandfather of Philadelphia Folk Music,” Gene Shay, the festival also features six stages on which you can explore a range of traditional and contemporary genres, from Celtic to Country. John Hartford, Arlo Guthrie, and Elizabeth Cotton have all featured in previous years. 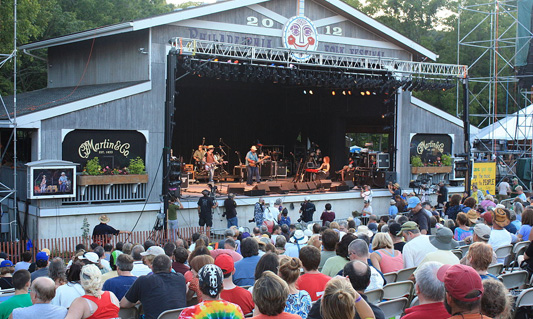 The Philadelphia Folk Festival is run almost entirely by volunteers, and their work begins many weeks before the gates open to the public. Ticketing stations, emergency points, performance sites, and much more must all be meticulously planned and set up.

Before Rajant, on-site communications between facilities and volunteers at the festival used old-school radio and basic cellular functions. This led to patchy signal and disrupted service. It became clear that more reliable communication methods were needed to ensure the successful, smooth, and safe running of the festival.

To help the festival continue its legacy, the Rajant Corporation of Malvern, PA voluntarily outfitted the entire 80 acres of festival grounds with its ground-breaking Kinetic Mesh™ Network technology. Using 14 BreadCrumb® wireless network nodes and InstaMesh software, Rajant created a resilient, high-bandwidth wireless network that could be utilized by festival organizers. The ruggedized nodes created a self-establishing mesh network without requiring a network administrator. As each BreadCrumb® is added, it multiplies bandwidth capacity. In this way, as the network grows larger, it also grows stronger. An Ethernet gateway enables users to gain access to the internet with ease.

Lewis Hipkins, Chief Technology Officer of the Philadelphia Folksong Society, explains how the technology works: “[the nodes] are battery operated, so it’s just a matter of mounting them on a pole or building. The mesh creates itself pretty quickly, and there’s a light on the unit, so you know when it’s working – you can drive past any pole, look up, and know if it’s working. The system is divided into multiple SSID’s for different access points and different purposes, so we can put it right where we need to have access.”

This new functionality also ensures that attendees can stay connected during their time at the festival, responding to increasing demand for wireless capabilities. For this reason, mobile broadband access was also added. Using a multi-spectrum telecommunications infrastructure, BreadCrumbs® provide Wi-Fi access across multiple frequencies. This allows large numbers of smartphone devices to wirelessly connect place voice calls – rather than attempting to connect to a 3G network in an area with limited coverage.

According to Rajant CEO Bob Schena, “the 10,000+ people who show up at the festival are accustomed to being connected – somehow – with the telecommunications network. Our job is to make sure that their expectations are met.”

Philadelphia Folksong Society President, Lisa Schwartz, agrees: “we have people who are able to make the time commitment to be here for four days, and yet still be in touch with their home, their office, or their business. That is passed through to our customers who see it as a definite value-add.”

Next, to answer to festival organisers’ need for connected infrastructure, the Rajant network powered the festival’s numerous applications including the ticketing system, communications between trailers and among volunteers, management and staff, and security – including Wi-Fi cameras installed at three main entrances, parking lots, and the campgrounds.

According to Hipkins, the real-time access to ticketing and other pertinent information has facilitated better event management: “we use it for monitoring our ticketing system, so instead of having to get to a terminal somewhere, I can use my iPhone to log onto the network, bring up the ticketing software, and actually look at how many tickets are sold now.”

The reliability provided by the Rajant network has also streamlined the way volunteers communicate. “Festival management is spread out all over this site,” explains Schwartz, “so instead of having to gather at one location, they can instantly communicate and know exactly what is going on at any point in time, anywhere. In the case of an emergency or some communication that we need to get out, the fact that we can do that in a global sense is very comforting.”

Rajant CEO Robert J Schena sees nearly unlimited potential for the application of Kinetic Mesh Networking technology, as demand makes bandwidth an increasingly scarce commodity. “What we see happening is continuing growth in demand for network connectivity by attendees and management,” he claims. “As smartphones become more and more capable, people’s expectations rise with those capabilities. So as telecommunications service providers scramble to find a solution for this incredible demand for spectrum and bandwidth that’s being driven by these new devices, Rajant’s technology enables a spectrum that was never intended for mobile use to be used by those devices today.”

Finally, the Kinetic Mesh solution is just as easy to take down as it is to assemble. Within hours of last year’s festival closing, the kinetic mesh nodes were removed – and just like that, the farm became a farm once more.