Samsung Wi-Fi and Horizon: behind the biggest rugby event in the world

A test of strategy, training, and sheer power, the Rugby World Cup is, without doubt, one of the world’s biggest and best sports spectacles.

Every four years, elite international teams battle against each other for the prestige of winning the William Webb Ellis Cup. 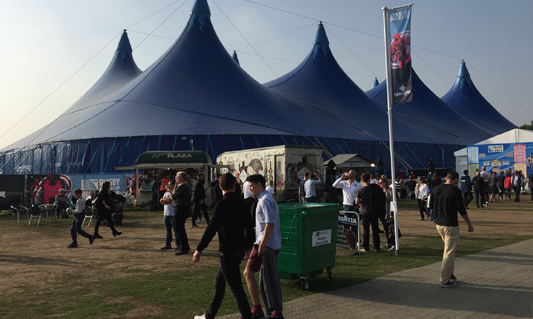 As ticket prices rise and home entertainment systems become more sophisticated and immersive, sports fans have never had more incentive to enjoy the tournament at home rather than attend the big match. To keep attracting spectators to the venues, organisers need to find a way to provide an interactive, connected experience that’s impossible to achieve at home.

So in 2015, the Rugby World Cup held in England had its sights set on a feat that no other large traveling sports tournament had ever accomplished – even the Olympics. The aim? A fast, dependable, and reliable Wi-Fi experience at every official Fan Zone.

To achieve these revolutionary Fan Zones, the Rugby World Cup partnered with Horizon Communications Technologies. As a telecommunication leader in infrastructure design, installation, and management, Horizon operates in both the US and the UK.

Each of the 14 venues hosting matches was given a dedicated Fan Zone that could accommodate between 5,000 and 20,000 fans on match days. To cover the wireless demand this inevitably created, a dependable network was essential – in particular, one which could thrive in a live and constantly changing environment.

Since most of the access points were installed on the Fan Zone marquees, Horizon had to wait until just a few days before the opening matches to implement the networks. Mike DeGraw, CEO of Horizon, explains the challenge this created: “logistically, it was a very difficult plan to execute. The Fan Zones were in parks and parking lots which aren’t traditionally easy to set up.”

And that wasn’t the only obstacle to overcome in this complex project. Often, the actual layout of the Fan Zone differed from the plans put down on paper, requiring Horizon to design the network at the time of installation – a huge test of agility and adaptability. “When we execute our installations, we usually have the opportunity to test,” DeGraw said. “We didn’t get to do that. We had to do a lot of field engineering on site. Once we turned up the network, that was it. The people were in there the next day.”

Add into the mix inclement weather and a three-hour Wi-Fi blackout when a power surge blew out a switch and damaged cables, and it’s easy to see why this project was one of the biggest and most complicated the team had ever faced.

Despite these various challenges, Horizon was able to accomplish what no other telecommunications company ever had: using Samsung equipment, they provided a fully functional Wi-Fi network in a chaotic, live environment.

Between the food, drinks, souvenirs, carnival rides, concerts, rugby-themed activities and the matches on giant screens for the fans to enjoy, the Rugby World Cup Fan Zones were an overwhelming success thanks in large part to the fast and dependable Wi-Fi network. More than 92,000 devices logged on to search for match content, access promotional information, and process mobile transactions.

“It was a first-of-its-kind both from the size of the sporting event to the technical architecture,” DeGraw explains, “and with the unique layout of each Fan Zone and the always-live environment, we couldn’t predict what was going to happen from one minute to the next. But we met our goals, and we’re happy with the results.”

This project has now set the standard for which all other world-travelling sports tournaments strive to achieve.